Last week I presented to you some anatomy around the shoulders and neck, and now is the time to use this newly acquired knowledge to create images that will help us progressing towards a better posture, and more relaxed, strong and stable shoulders. There will be many images, so feel free to just pick a few and play with them, and come back to this post when you want more material.

First an image using the first cross, the one between the lower skull and the scapulae:

Then some using the same cross, but continued by the serratus anterior:

Then images centred around the scapula: 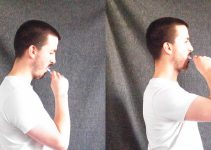